FAQ1: Do I need to add egg-yolk to SpermFreeze before use?
No you don’t!
SpermFreeze is a ready-to-use freezing medium which doesn’t require any additives. Just follow the instructions and the sperm sample will be safely frozen and thawed.

FAQ3: Can I use SpermFreeze for TESE?
Yes you can, you don’t have to add anything it’s as easy as using SpermFreeze with ejaculated sperm.

FAQ4: How long can I keep sperm in a frozen state?
Once frozen at -196°C, sperm can be kept for 10 to 20 years (possibly even longer). Note that the fertilising potential can be diminished after a long period of freezing.
The critical part in the freezing process is the actual freezing itself, this is where the damage is done to the cells. SpermFreeze was designed to avoid damage during freezing, it is advisable however to test-freeze a semen sample. If viability and motility are dramatically decreased, try a programmed freezing protocol.

FAQ5: Do I need to wash thawed samples before use?
We strongly suggest washing the sperm sample after thawing to remove the glycerol from the medium.

FAQ6: We have noted that after thawing the tails of the spermatozoa are curled. Is this normal?
No this is not normal. Curling of the tail occurs because of osmotic shock when SpermFreeze is added to the semen sample.
To avoid this, add the SpermFreeze medium slowly and dropwise, while swirling the container that holds the semen sample. This way the spermatozoa have ample time to adjust to the new osmotic equilibrium.

We have performed open bottle tests on our media for up to 7 days and found that the product parameters stayed within the specifications in this time period, taking into consideration that the bottle was opened under sterile conditions and the product was stored at 2-8°C after opening.

FAQ9: Can SpermFreeze also be used with cryotubes instead of straws?
Yes, the same protocol as mentioned in the instructions for use of SpermFreeze can be applied.

FAQ10: Why place an air bubble in the center of the straw?
An air bubble is placed in the middle of the tube in order to prevent rupture of the seal at the end of the straw when the SpermFreeze/semen mix expands during freezing.

FAQ12: What should be the temperature of the thawing procedure (tap water)?
The temperature is not so critical. Thawing at 4°C, 20°C or 37°C does not make a difference.

FAQ13: Can a sample be washed before freezing?
Yes, as long as the same dilution factor is used as with fresh semen.

FAQ14: Can a sample be purified before freezing? (density gradient centrifugation or swim-up)
Yes, it can. It is important to keep the same dilution factor as with native semen however. 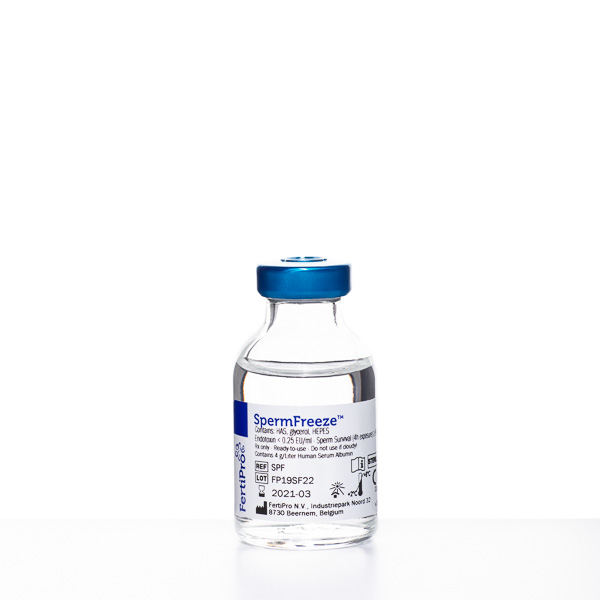