FAQ1: How long can we wait before the test should be performed?
Perform the test preferably within 1h after collection, especially in samples with low motility. If motility is high, it might be possible to perform the test later (max 3-4h later).

FAQ2: Can we perform the SpermMar IgG test on washed spermcells ?
We advice against washing the spermcells before performing the direct SpermMar IgG test for a number of reasons.
First of all, some washing media contain human serum albumin (HSA). HSA tends to form a “shield” around the spermcells which hide the antibodies so that they can not be detected by the test method.
Secondly, washing the sperm sample will remove most of the antibodies that could be present in the seminal plasma and might thus render false negative results.

FAQ5: Sometimes when I do the SpermMar IgG test, the spermcells stop moving after 15 minutes, is this normal ?
Yes it is, after mixing the reagents with the spermatozoa wait 2-3 minutes before reading the results, you should not wait longer than 5 minutes.

FAQ10: When should an indirect SpermMar Test IgG be performed?
The indirect test is recommended in case of low sperm concentration or low sperm motility. It can also be used to test female serum.

FAQ11: Can we perform the Indirect SpermMar IgG test on frozen/thawed semen plasma samples?
Yes it can. It is best centrifuge the UNTREATED semen sample before freezing the semen plasma at -18C or below.

FAQ12: Can the direct test be done on frozen/thawed semen samples?
No, it is recommended on native samples because HSA in cryoprotectant can mask anti-sperm antibodies on spermatozoa. 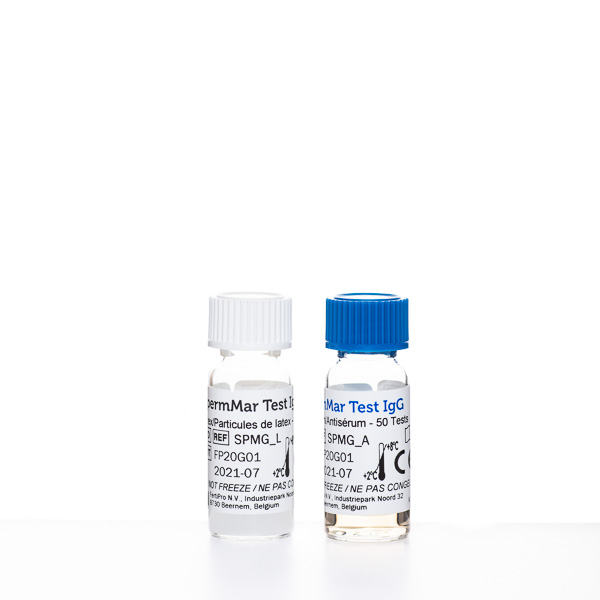